How to make fat look bad 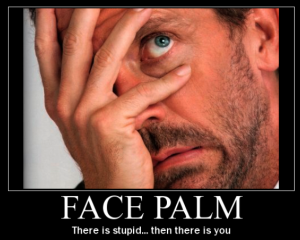 This is a topic that was covered at the Mac-Nutrition Conference 2011 and we're wondering whether we might write an entire article series on this because quite frankly we're not sure whether researchers are doing it on purpose or whether studies like this are actually written by PhD students with a lack of common sense and supervisors that forgot to proof read it!

Below is the conclusion of a study we stumbled across randomly. We hate to think what we'd find if we actually start looking for them! So, there are two possibilities here, maybe fat has got its flaws and Mac-Nutrition needs to publish a public apology and write a new position statement.. OR… this study is so misleading that it should never have been published….Guess what…. We'll not be publishing any apologies just yet.

The interpretation of these results in relation to the daily life situation may be that, within the range given in this study and controlled for all other factors, the higher the fat content of the diet, the lower satiety and diet-induced thermogenesis will be.

In other words, the more fat you eat the hungrier you'll be and the slower your metabolism will be…. The objective of this study was to look at whether people felt fuller after particular meal types and whether the meals induced differing amounts of energy expenditure i.e. if you eat meal 'A' do you burn more calories than if you eat meal 'B'. So, the subjects were 8 females of average weight. They were fed 'in energy balance' under two different conditions:

So, the second trial is termed (in the study) the high fat trial. The first trial is high carbohydrate AND high protein… because of course protein and carbohydrate are equal right? Hmmm… what we REALLY see is that we're comparing High PRO vs Low PRO… but of course, if someone has an agenda… or no common sense… they'll group 'healthy' carbohydrates in with protein and call the opposite group high fat instead of high fat, LOW protein.

So, we look at the results and of course, the group that consumes the most protein has a Diet-Induced-Thermogenesis (DIT; extra energy burned by consuming this meal) of 14.6% and the one with less protein has a DIT of 10.5%. Low and behold, "high fat is bad!" WHAT?! Sorry 'Margriet S Westerterp-Plantenga' (lead study author) but we think you've gotten a bit mixed up.

Again, high protein induced greater feelings of fullness during that meal and over 24 hours…..and carbohydrate obviously jumps on this band wagon. If you're not quite following, here's an analogy (that you're not going to get unless you've watched Rush Hour so see below).

In this ridiculous study we have the authors bunching Jackie Chan (Protein) and Chris Tucker (Carbs) together as though they are equals. One creates havoc in many people in high doses, the other is a badass that can do no harm and pretty much, if he's on your team, you're gonna win. Jackie Chan would win without Chris Tucker and might even do a whole lot better. If you put Jason Statham (FAT) in with Jackie Chan (you've got a seriously winning team/meal). So, why not do a third study group…

Then we might get a better idea of what is really going on instead of publishing something that is misleading at best if not downright damaging.