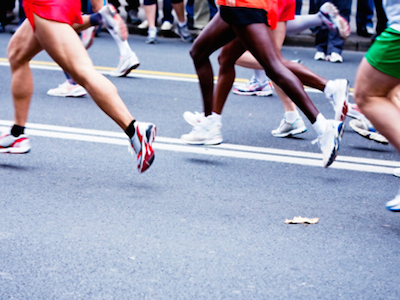 Just a couple of interesting studies basically showing that eating a low fat diet (15-16%) worsens markers of cardiovascular disease risk. We hopefully all know that eating less than 15% fat is a bad idea, even the government doesn't recommend less than 15% but here is some evidence that perhaps even a 'healthy low fat diet' (16%) is worse than 42-45% of your calories coming from fat?! Even in endurance athletes!

Effect of a high or a low fat diet on cardiovascular risk factors in male and female runners.

A slightly odd study looking at the effects of fat intake on coronary heart disease risk factors in runners. The study used 16%, 30% and 42% fat diets for 4 weeks at a time. Interestingly, as fat calories increased, the researchers let total calories increase so that the 42% fat diet was around 20% higher in calories!

The measurements the researchers took were:

The findings and conclusion of this study really are interesting. The endurance athletes on the low fat diet had lower levels of 'good' HDL cholesterol a higher TC/HDL-C ratio (a lower ratio is generally accepted as being better) compared to the 30% fat diet. When runners increased fat intake to 42% it further raised 'good' HDL cholesterol without adversely affecting other lipoproteins.

A 42% fat diet maintained favorable CHD risk factors in female and male runners whereas a 16% fat diet lowered Apo A1 and HDL-C and raised the TC/HDL-C ratio.

Reading this study was refreshing! Balanced information in research is so hard to come by! Trust it to be research in athletes, NOT designed to change public health policy to contain such excellent information.

If dietary fat contributes to excess caloric intake and obesity, then CHD risk will increase. In those studies showing lower rates of atherosclerosis on a low fat diet, multiple lifestyle factors (weight, smoking, activity, other nutrients) changed simultaneously, making it difficult to isolate dietary fat effect. In most studies sedentary individuals who reduce fat intake also lose weight (i.e., are in negative caloric balance). Yet if caloric balance is maintained, then higher dietary fat does not appear to adversely affect lipoproteins. Moreover, a low fat diet is difficult to maintain for a long time and only minimally influences long-term body weight and composition.

So, onto the 'interesting' conclusions. Read this little snippet from the researchers:

While the percentage of dietary fat increased, weight and adiposity remained stable so that fat calories did not cause excess total caloric intake. The fact that runners did not lose weight on 16% fat may be a result of a compensatory reduction in basal metabolic rate as endurance athletes can maintain body weight in the presence of a caloric deficit

The intake of the 42% fat diet was 1000kcals higher compared to the 16% fat diet but yet no increase in weight or adiposity was found!? This is something many female athletes reading this blog will understand! They can eat very little, run a LOT and not lose weight! The researchers just call you liars. They say you do not report what you actually eat and that it would be impossible for a female to eat 1400kcals whilst training for multiple hours per day and not lose weight. Well, we both know that it's not impossible and it seems that these researchers might also know it too. Moral of the story is… there's probably more to losing body fat than simply exercising more and eating less… we'll leave that for a future blog though.

The second study is similar: Effects of high fat versus high carbohydrate diets on plasma lipids and lipoproteins in endurance athletes.

Well, what a starting statement!

Recent research suggesting the performance benefits of high fat diets for endurance athletes have been viewed with caution because of the potential negative health consequences, including increased coronary heart disease risk.

Triglycerides (a marker or cardiovascular disease risk) increased significantly in high carbohydrate group. Unfortunately the conclusion of the study does not highlight this and it chooses to focus on the 'amazing' fact that increased fat intake didn't cause any harm… duh!

CONCLUSIONS: During periods of endurance training when energy requirements are high, increasing the percentage of fat in the diet to approximately 50% of total energy did not result in adverse changes to the plasma lipoprotein profiles of this group of athletes.

If you're an endurance athlete looking to plan a dietary strategy. Get your baseline as 25% of calories from fat as an absolute minimum and then work up from there! Trust us… We're not doctors.