Red Meat and Heart Disease – is Carnitine the link?

So, we're now being told the 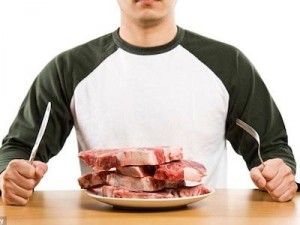 saturated fat and cholesterol content of sirloin steak is not high enough to contribute to an increased cardiovascular disease (CVD) risk. Instead, the link between red meat and heart disease is apparently due to a compound called carnitine that is converted, in part, by bacteria in the intestine to trimethylamine (TMA) which is absorbed and then enzymatically converted by the liver to trimethylamine-N-oxide (TMAO). Chronically high levels of TMAO have been shown in mice to accelerate atherosclerosis (thickening of the artery walls) and in humans, elevated levels seemed to be linked to CVD and major cardiac events such as heart attack or stroke. So did this 2013 study really show a strong link between carnitine, red meat and heart disease? In short, no. If you'd like the take home message without having to read more than a sentence or two see the take home message on red meat and heart disease.

Let's take a look at the study and what it actually tested. The study was done in parts, some of it in humans, some of it in mice. In some tests they fed carnitine supplements, in others they fed red meat. It should be said that across the land of meat eaters that the issue is probably down to huge supplemental doses of l-carnitine and not the relatively small amounts found in red meat. From the study details it does not seem this is the case, if you are drawing conclusions from this study, you're talking about sirloin steak. Does it matter that it probably wasn't organically raised, pastured Irish beef? Who knows!? Could antibiotics used in intensively farmed cattle be having an effect on the gut bacteria? Maybe! However that seems entirely irrelevant to this study (yet one considerably well-known website is claiming that this is the reason for the anti-red meat findings).

The results of the study show the following:

Of men, not mice

Of men, not mice is another paper in this world leading journal which highlights "just how poorly the mice reflected the human disease." Especially in instances of inflammatory disease involving immune cells… as with our 2013 study on mice, carnitine supplementation and atherosclerosis.

What is also interesting to note is that earlier studies have shown that L-carnitine treatment tends to restore to normal values to "both the chemical composition of lipoproteins and the apoproteins pattern of rats fed on a diet enriched with cholesterol." Were these earlier mice vegetarians or perhaps not bred with a genetic mutation?

Is the gut flora of vegans and vegetarians healthier?

It's interesting that some intelligent people in the blogosphere are choosing to focus heavily on the 'gut bacteria' aspects of this study and, perhaps by doing this, giving support to the notion that red meat is 'bad for you'. The gut flora (bacteria in the gut) is most certainly exciting as an emerging area of interest that no doubt has huge implications for human health; but the only thing this study adds to that area is that the gut flora is affected differentially by different eating patterns. The positive or negative of these eating patterns is left to be determined. Eating more carnitine increases the amount of bacteria in the gut that break it down to its natural by-product, TMA – this seems only logical that the body would do this. We will have to wait until someone tests this empirically. Interestingly, it is those subjects with 'normal' gut bacteria that produce the TMA, but when we kill the natural gut flora with antibiotics we don't get TMA. Can anyone actually believe this would be a good idea?

Similarly, those putting major emphasis on the cholesterol aspect of this study are going off on unnecessary tangents.

What SHOULD we take from this study? 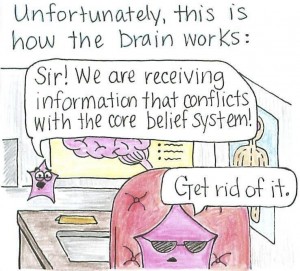 Well, just for a minute let's say there is something to all this red meat and heart disease risk and the link is in fact TMAO. Do other foods lead to increases in TMAO that we should also avoid? Interestingly, this study showed, compared to beef, there were greater levels of TMAO after consuming peas, potato, cauliflower and carrots to name but a few! The study actually showed that the increases in TMAO with all of the aforementioned foods was not significant (using a very similar food bolus to the 2013 study) whereas seafood led to 50 fold greater increases! Does eating fish lead to atherosclerosis now? Of course not! This is a huge flaw in the current studies conclusions – "may thus contribute to the well-established link (of which there isn't one) between high levels of red meat consumption and CVD risk." Their preconceived idea that red meat leads to heart disease is supported by their findings. What if they had used fish, the heart healthy food? Would this study have received the same air time if it had directly contradicted their current belief? Let's hope so….

What it is fair to say is that chronically high TMAO levels are perhaps legitimately linked to health issues; however, it is reasonable to assume that the reason for it being high, despite the bodie's ability to efficiently excrete TMAO, is where efforts should be focused. Patients with end-stage renal disease, for instance, given L-carnitine supplements do accumulate TMAO due to impaired excretion. In a normal, healthy individual, the rise in TMAO would likely be transient due to increasing excretion with increased intakes. Similarly, the enzyme that converts TMA (the stuff that is made from carnitine in the gut) to TMAO in the liver, is known to have many genetic mutations; it's possible that in some individuals there is an over conversion of TMA to TMAO but this is purely speculation at this stage. It may even be that elevated carnitine levels may be a legitimate predictor of health issues but again, the reason for elevated carnitine levels needs to be elucidated. It could simply be a product of ill health or a natural by-product of the body trying to maintain homeostasis in disease as is the case with choline.

It is worth noting that chronic high level carnitine supplementation (2g+ per day) may increase TMAO levels. Whether or not this is an issue remains to be shown in humans. It seems that above a dose of about 1.5g per day the clearance doesn't keep up with the production as evidence by the non-linearity of the pharmacokinetics of oral l-carnitine.

It's also interesting to note that carnitine has long been viewed as a supplement for promoting health! It is also gaining some standing within the sports nutrition research community. Here are some key highlights in carnitine's career:

Clearly there is much research left to be done in this area but for now, it is a leap of faith to draw strong conclusions from this 'red meat and heart disease' study.

So what is the take home message of this 'red meat and heart disease risk study', if you are human? As you can imagine, the take home message is the same one that has been spoken about in the world of Mac-Nutrition time and time again. It is the same as it was when the saturated fat and cholesterol in red meat were associated with heart disease and when red meat was associated with bowel cancer…..

If you are otherwise healthy, your (not over-cooked) red meat intake as part of a varied diet rich in natural foods, probably has very little to do with your disease risk.

If you are otherwise healthy, your red meat intake, as part of a diet rich in natural foods, probably has very little to do with disease risk!

If you're a rodent what should you do? We're not entirely sure! It probably depends on your genetic predisposition because carnitine might stop you getting diabetes due to its ability to inhibit protein glycation! It's also been shown to be protective of liver and heart lipid peroxidation if you already have atherosclerosis! Confusing huh? Maybe you should do some research in humans and then correlate those results to yourself… Sounds like a good idea.