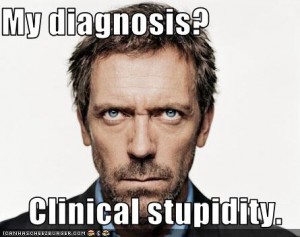 This is the conclusion of a study I stumbled across whilst researching for my 'Saturated Fat Series'. At this point, refer to my image on the left… if you were studying in the Department of Psychology, Saint Louis University, where this study was conducted… would you not be having words?! Where has the process of peer review gone? In fact, forget peer review, peer pressure to give up the day job is what these researchers need!

OBJECTIVES: To compare the efficacy of a low-carbohydrate high-fat versus a moderate-carbohydrate low-fat diet for weight loss and cardiovascular risk reduction.

Now this is where it gets funny. If you've read through my paraphrasing of the study you've hopefully gleaned that the higher carb group was clearly inferior to lower carb in this study. However, check out this conclusion. This is the conclusion of the abstract in its entirety.

Moderate approaches to weight loss such as a moderate-carbohydrate low-fat diet may be prudent.

At this point I'm lost for words. Well, lost for any words that wouldn't be preceded by profanities, so I'll leave it there.

So this has just been sitting waiting to be published and as I posted on Facebook yesterday, I do get so annoyed by this kind of thing but the video below just puts it all in perspective.