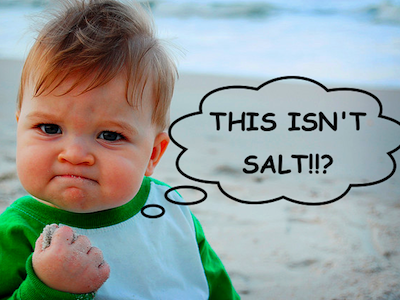 Despite my fairly strong views that the current recommendations regarding salt intake and blood pressure are premature, I don't think I've ever actually written a research update on a paper looking at salt. One thing that has held me back from writing about salt is that it is a huge subject with just about as much dogma surrounding it as fat. I've also never wanted to be careless with my advice hence wanting to write something extensive as opposed to piecemeal blogs.

I want to start with three little pieces of information/advice:

I will say from the outset that based on my current knowledge and the information available, I couldn't tell you where a healthy limit for salt lies. I use the term 'premature', above, purposefully, rather than 'wrong'. My issue with the guidelines is that they have become a dogma. They have become a one size fits all recommendation. For many, there is the belief that salt is as bad as trans fats and it should be kept to an absolute minimum if you want to be healthy when the fact is that lowering salt to a great extent can cause death! There is a physiological NEED for sodium unlike carbohydrates for instance, which are not necessary to sustain life. I have come across some shocking real life instances of salt related dogma. Healthy eating talks to young athletes that have included the 'eat less salt' message (more on this later) and individuals suffering from severe cramps who do not want to increase their salt intake due to the 'health risks' that it apparently imposes! Recent news has been publicizing the supposed stomach cancer causing properties despite the recent evidence simply being from observations not controlled intervention trials. The British Journal of Cancer recently published a paper that stated: "There is no direct evidence from intervention studies of the benefit of reduced salt intake with respect to gastric cancer." However, do we ever get this information included in the headlines to give a more balanced view? I've certainly not seen it.

My other little bug bear is money being spent on huge initiatives to reduce salt intake that a) don't work to either reduce blood pressure (BP) or cardiovascular disease and b) don't focus solely on processed junk food! If eating too much salt DOES pose a health risk we'd kill two birds with one stone by finding ways to get people to stop eating processed food and to cook wholesome natural foods for themselves. Not only would we reduce sodium intake but we'd also possibly reduce diabetes, obesity and cancer prevalence!

To start with, I want to tell you that it is virtually impossible to eat a lot of salt if you stick to real, natural, minimally processed foods. Try physically adding this magical figure of 6g of salt to your food each day… its tough! The thing that makes it easy to eat a lot of salt is processed junk food. Despite the World Health Organisation and the Government advising us to cook with less salt and not to add any salt to our meals, they are well aware that approximately 75 percent of the salt the average individual eats is derived from salt added to processed foods by manufacturers. It is well known to the Government and other 'salt haters' that around a fifth of our salt intake comes from shop bought bread. Guess what people eating the 'Mac-Nutrition Way' don't eat a whole lot of? Shop bought bread! The reason for this is not because it is high in salt, it is because it is a highly processed, nutrient sparse 'food' that contains little more than synthetic (man made) vitamins and minerals and sugar. Yet how often have you heard those working in public health policy say 'eat less bread'? Oh no, manufacturers should simply add less salt to bread and clearly label how much salt is in their bread!? Madness.

I'm going to lay my cards on the table from the get go so that those of you with limited time can get the entire jist in just a few short points, but first, just two short paragraphs to set the scene.

Three key things that affect BP are heart function, blood vessel health and the volume of blood in your system; I am going to focus on the latter. You can think of your blood system as a series of pipes containing liquid with no outlet as it were… unless you lose a finger or alike. Let's be clear, it is not like a hose pipe where the 'liquid' is being pumped in one end and out the other. Your blood plasma is made up largely of water (~90%) therefore the amount of water in your body has a big effect on the volume of blood.  So, less water = less blood = less pressure. As a quick for instance, have you ever been dehydrated (perhaps from too much alcohol…) and the next morning you have got up and felt light headed? That can be due to a lack of blood pressure caused by dehydration. With this very basic knowledge you should hopefully be able to follow my 10 point list on the real deal with salt.

The Case on Salt – my 10 point summary

There you have it, my 10 point summary that covers a lot of what I will be writing about in future articles but gives what I hope is a useful starting point for people to make changes in their own eating. To give a little more detail, the topics I hope to cover in more depth later on are:

In the meantime, take a watch of my short video on salt and any questions or thoughts you have on this topic, leave them below and I'll either answer straight away or include in a later article.

Want to read more about a topic covered here? Click on the 'Tags' below to see articles related to that topic: