Vitamin D research really is gaining ground all the time! After being asked a question about Vitamin D recently we did a little search to see if there were any new studies and low and behold we came across this little gem, just 2 days old! Unfortunately we have been unable to get hold of the full article as of yet but it looks interesting from the abstract. If you’re not fully up to date on the whole ‘Vitamin D’ thing.. then check out the previous blogs on this hot topic:

The first thing to highlight here is that the study is a cross-sectional study and as to reiterate previous preachings… this type of study does not show cause and effect. It is not mechanistic and simply shows associations and trends. The study associated low Vitamin D levels with greater gains in weight, body fatness (skinfolds thickness) and waist circumference. An initial thought in this instance is that perhaps children with the lowest serum vitamin D levels may be the ones spending the least time outside and therefore getting the least exercise? While habitual exercise doesn’t generally have a huge impact on body weight it might be indicative of a healthier lifestyle altogether. Just a thought. It is also a chicken and egg scenario … did the low Vitamin D cause the adiposity or did a genetic predisposition to gain weight also cause the low Vitamin D?

What is interesting to note is that this study was undertaken in Bogota, Colombia, which is blessed with far more sun than the UK and yet children there were deficient in the ‘sunshine vitamin’… food for thought…

CONCLUSION: Vitamin D serostatus was inversely associated with the development of adiposity in school-age children.

Similar associations between abdominal fat and body mass index and vitamin D status have been found in Spanish schoolchildren.

Update: After writing this blog initially, another study was published in this area titled: Preliminary data about the influence of vitamin D status on the loss of body fat in young overweight/obese women following two types of hypocaloric diet. 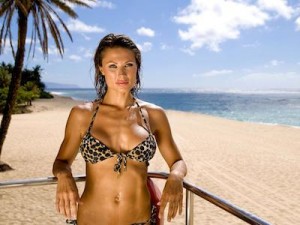 In this study, women were assigned to one of two diets, one where the consumption of vegetables was increased and the other where the relative consumption of cereals (especially breakfast cereals) was increased. In each group the women were divided into those with low Vitamin D (LD; <50 nmol/l) or high Vitamin D (HD; >or=50 nmol/l) (see sidebar for what these levels equate to). Both of these diets led to a reduction in energy intake, body weight and BMI in LD and HD.

However, the HD women showed greater body fat losses than the LD women (1.7kg compared to 0.5kg). When the dietary groups were analysed separately, this effect was only seen in the increased cereal subjects who likely had a greater supply of Vitamin D through fortification. The study therefore concluded:

The present results suggest that women with a better vitamin D status respond more positively to hypocaloric diets and lose more body fat; this was especially clear among subjects who had a greater vitamin D supply during the experimental period.