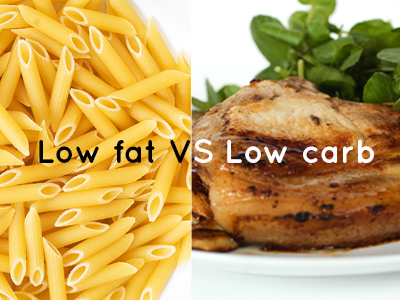 This is an interesting study as it looks at real world situations with "few resources allocated for achieving compliance, so that clinical use of the protocol would be realistic for many providers of care." The specific terminology used in this study shows that we are looking at what the effect of the advice does to the outcomes measures. Bear in mind that this therefore means that individuals on the low fat diet may have not been eating 'low fat', or those on the low carb diet may have not been eating 'low carb' but compliance in the study did seem to be good based on a zero dropout rate and food diary records. Another thing to mention here is that in the 'low carb' diet it was replaced by both fat AND protein so the beneficial effects in this study are linked to a low carbohydrate diet not necessarily a high fat or high protein diet. This is somewhat of a moot point as consuming more protein often leads to a concomitant increase in fat and vice versa… e.g. eggs, steak, bacon, nuts, dairy etc.

(A quick note, for those of you who may have missed the previous study on Low carbohydrate High Protein diets that we posted, you can get information and websites by clicking this LINK.)

As we jump quickly to the conclusion as it rings true with a question that was posted on our old Q&A page about the ability of dietitians to 'not toe the exact party line' of the Government/NICE guidelines. Dietitians can, and do, use these methods on a regular basis; the only real requirement is that their practice is evidence based. Obviously this means those who want to act outside of the 'EatWell' (haha) Plate need to be on the top of their game with knowledge of current literature and may even be asked to provide 'proof' which again doesn't make for an easy working life but who ever said greatness was easy?

Anyway, here we are making dietitians lives a little easier. Evidence! Specifically, here is what the very balanced conclusion of the study stated:

Thus, aiming for 20% of energy intake from carbohydrates is safe with respect to cardiovascular risk compared with the traditional LFD and this approach could constitute a treatment alternative.

See what we mean about balanced? Nothing extremist there! We need to look at the results to actually find out why it could constitute a treatment alternative. First though, some basic info on the methods.

For those of you who are confused by those last two bullet points, basically, because the study is looking at the effect that the advice has on people's health, it's not necessarily looking at what effect the specific diet had on their health. So if a group of people are advised to do one thing but they ALL do something else, it's pointless to give them that advice in the real world setting. This also gives us some good ideas about why differences might be seen early on when people are complying but then there are no differences later on when people's motivation or dedication is waning.

Note that all of the above was with differences in weight loss between groups. In fact, in absolute terms, the LCD group lost around 30% less weight yet had significantly better improvements in the measures outlined above. All in all this study shows that with VERY few resources, advice to follow a low carb diet is at worst not detrimental and realistically has some positive outcomes especially in the short term. The discussion of this study highlights that results in weight loss were conflicting to many other studies, which find lower carb diets to be better but state that with only 4 meetings in 12 months it was hard to guarantee compliance. Other studies that have shown LCD led to greater weight loss used as many as 18 group meetings to keep individuals on the 'straight and narrow'.